PLC to OPC to Excel Integration

MCi takes pride in developing its own ideas and solving its own problems. One example is the Manorhamilton engineering team’s approach to collecting and viewing production data. On each of two production lines, the team has developed a system that collects production data and feeds it to some sophisticated Excel spreadsheets. The data flows from their Saia PLC to a Merz OPC server, and then to Excel, which compiles the data and charts hourly production totals, downtime, and product quality. 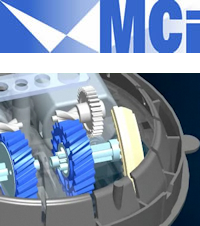 Useful as it is, the system has had a nagging problem for a long time. "We've been developing our data monitoring system for the past few years," said Paraic McDonagh, a team member. "It works very well, but there was one downside--there were bugs in the Excel plug-in that forced us to restart the PCs every so often."

After much effort to work with or work around the faulty plug-in, the team finally turned to the web for a solution. When they found the OPC DataHub, they figured it might be possible to just drop it into their system and configure the reliable link to Excel that they needed. They soon realized that the OPC DataHub could not only solve their problem as hoped, but was able to enhance their system in other ways as well.


"Setting this up was as simple as attaching the OPC DataHub to the Merz OPC server and dragging the data points into Excel," said Mr. McDonagh. "And by replacing the troublesome Excel plug-in with the OPC DataHub we were able to simplify the SCADA system into a single workbook. What's more, since the OPC DataHub can be run as a service, our operator now only needs to open a workbook to have the entire system up and running."

"Here's how it works," continued Mr. McDonagh. "The OPC DataHub feeds raw data into a column of cells in the ‘RAW_DATA’ sheet of the workbook. Then an Excel macro triggers every hour, causing the cell values to shift one column to the right. After 24 hours, the data begins to roll over on an hourly basis. Since the PLC counters do not reset, a separate ‘CALC_DATA’ sheet calculates the difference between each hour column and thus determines the actual count value to display. All other worksheets are a manipulation of this data for display purposes—graphs, tables etc."


"We are very happy with the software," said Mr. McDonagh. "It’s stable. A big plus for us is a high degree of confidence that prompt technical support is available from Cogent when we need it. That was not the case with our buggy Excel plug-in. Now the system is up and running with the OPC DataHub, and we haven't had to restart the PCs at all."