Fenclo, Ltd. located near Montreal, Quebec, is the manufacturer of wooden and vinyl fencing products. Their state-of-the-art facility relies on OPC to provide a live connection between their production equipment and their MES (Manufacturing Execution System). Recently they started using the Cogent DataHub to manipulate the data midstream between these two systems, adding intelligence and new capabilities to the data transfer path. 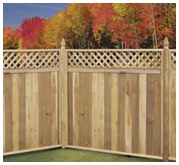 Last year the Information System team at Fenclo needed to get more mileage out of their system. Specifically, they wanted to be able to run calculations on the data flowing between the OPC server and the OPC client. A friend in a sister company who was working with the Cogent DataHub told the team about its wide range of features, including OPC bridging and scripting. So they gave it a try.

The initial scripts were so successful that the team soon found other uses for the Cogent DataHub. For example, they created a script that lets them control the run and idle settings on their plant equipment from within the Factelligence software. The script polls a few specially created fields in the Factelligence ODBC database, and based on the latest entry of plant personnel, sends commands to the OPC server to switch the machinery between idle or run modes.

In addition to scripting, they are also using the bridging feature of the Cogent DataHub in a unique way—to bridge data tags on a single OPC server. Rather than creating a whole new set of tags on the OPC server, they simply send the source tag values to the Cogent DataHub and bridge them to the destination OPC server tags represented by DataHub points. The values then get written in real time back to the corresponding tags in the OPC server.

Most recently, they have been using the email capabilities of the Cogent DataHub to produce alert messages. The company can now send email messages with dynamic content on certain events. This simple feature gives the plant operators greater mobility and reduces work-load. The Cogent DataHub has added entirely new functionality to the existing system at minimum cost. The resulting access to information saves money by reducing process down-time.

"We had an issue recently when a message was received that there was a failure on the ODBC data system," said a team spokesperson, "but we were able to react in time to save the data, and we found the problem in the connection. This is just one more example of how we benefit from the Cogent DataHub. It is an excellent piece of software."