Using OPC tunnelling, bridging, and server provided by Software Toolbox that allow an old and new control system to operate in parallel and share information so that operators would always know what was happening during a changeover, Motiontronix, a Wonderware Certified Systems Integrator in Johannesburg, South Africa specializing in InTouch applications, eliminated at least 30 days of downtime, saving their customer over $21,000,000 in lost production value.   For some upcoming projects at larger sites, the savings are expected to amount to over $57,000,000.   This story tells how they realized these incredible results.

Motiontronix’s end-customer is a large food processing mill in a remote location that operates 24 x 7. When upgrading control systems, key objectives are to minimize downtime and trips to the client Motiontronix’s goal was to maximize the customer’s production time while changing a control system PLC hardware by running the old and new systems in parallel. Their most recent project involved upgrading InTouch as well as upgrading from old Modbus serial devices to new Mitsubishi Q series PLCs.

In previous installations, this work was done in four days working 24 x7 since the old and new systems could not communicate in parallel and lost production had to be minimized. The extra costs and risk of error from such long shifts were high. The biggest problem during the changeover period occurred when an operator selected an operation from the old SCADA. Operators and engineers testing the new system could not see the changes. In ideal situation the new system (HMI, PLC program, IO server) could be checked before taking the old system off line and the systems could operate in parallel. However, this has not been achievable prior to the current solution.

According to Rudi Van Der Merwe of Motiontronix, “the overall system normally consists of about 7 to 8 PLC’s with approximately 3500 I/O points. Assuming you just take one minute on each I/O point for checkout you need about 60 hours to change from the old to the new system if there weren’t any problems. Reality is there are always problems so changeovers would take even longer. Production time lost in the conventional method would have been a minimum of 1.5 to 2 months.”

Rudi adds, “With the OPC DataHub software provided by Software Toolbox it is quick and does not slow the overall system down and you do not have to rewrite tags and this makes it possible to change each PLC as we like and keep the systems running in parallel. The other big advantage is that if you encounter any problems with the new system you could switch back to the old system within 15 minutes, nearly like a total redundant system. I would say using the Software Toolbox solution is like no production loss vs 30 Days production loss, which is where the $21,000,000 in savings comes for our client on a small mill.”

The solution Rudi found from Software Toolbox and their development partner Cogent Real Time Systems uses their TOP Server OPC Server and OPC DataHub tunnelling and aggregation software to minimize downtime and configuration time while increasing performance.  To complete the customer’s upgrade, Motiontronix used the TOP Server Mitsubishi Suite driver with its SuiteLink and OPC interfaces to provide data to the new InTouch application and the OPC DataHub to allow the two SCADAs to share data from the single driver across the network, without using DCOM, a key consideration for reliability and ease of configuration and setup.

As shown in the system diagram, this was accomplished by using one OPC DataHub node as a DDE Client on the PC with the existing system’s Wonderware Modbus I/O server.  The second OPC DataHub node was used on the TOP Server PC as an OPC client talking to the TOP Server OPC and I/O Server.  Using the tunnelling, aggregation, and bridging capabilities of the OPC DataHub, they were able to mirror the data across the network without DCOM and bridge between the OPC and DDE servers, thus sharing data between the SCADAs and allowing both systems to run concurrently. 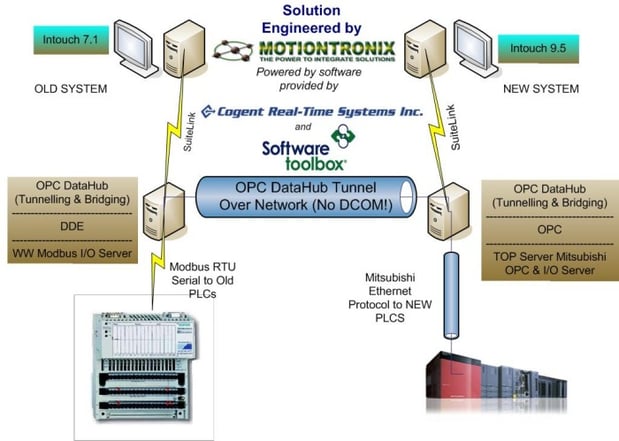 Before the reader becomes to skeptical, and because we too are engineers at Software Toolbox, we asked Rudi to explain in his own words how they managed to handle the real-world I/O interactions between two PLC systems without significant downtime.   We asked Rudi “so did you wire the I/O to both PLCs? How?”  Here, in Rudi’s own words, is how he accomplished this feat and used the OPC DataHub and TOP Server in the solution.

“Good question guys - We did wire physically all inputs and outputs from the old PLC to the new PLC, otherwise it would not be possible to know when a device switch on or off.  As you’ll see below, that was the easy part, but when the operator changes a set point or other value in the Scada, such as increasing the production rate, we couldn’t see it, as the change was done in the old Scada.

To summarise:  Any information that was shared between the PLC’s via the Scada we couldn’t monitor on the new system without your solution. OPCDataHub allowed us to monitor all this information.

The Projects were done as follows:

In closing, Rudi adds, “With us now getting the two SCADAs sharing real-time information and the programming tested we can changeover within an hour. This is done when the customer stops production for their normal 8 hour weekly maintenance per PLC. Certain PLC’s in the system are mission critical for the operation of all the mills and the customer cannot afford to stop for long periods of time. There is also less pressure on engineering to complete each change over as all the wiring to get the two systems operating in parallel is done beforehand.”