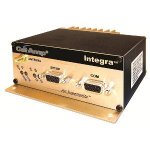 Since 1997, DCI Technologies Inc. has engineered reliable communications solutions for a wide variety of production and business critical applications in industries including oil, gas, railroad, water, wastewater, mining and power/utilities. With the majority of companies in these industries requiring wide area distributed radio networks for communications, engineers in charge of these radio networks have the daunting task of maintaining the highest level of performance and uptime at all times.

Radios such as the Cal-Amp Integra-TR used for these networks provide powerful diagnostics reporting on the functional state of the radio for use in more easily troubleshooting issues that may arise. However, with these diagnostics only being available at the radio site using proprietary software, the usefulness of such a tool is diminished.   It would require a technician to drive to the site before any troubleshooting could be accomplished using the traditional diagnostics capabilities.

DCI Technologies needed a reliable method for tapping into the radio’s serial diagnostics data remotely so that troubleshooting could occur without having to visit each individual site. Furthermore, the diagnostics data would be even more useful when captured and trended historically for use in identifying problem trends for the radios – potentially even allowing proactive maintenance to prevent a full-blown failure.

Initially, DCI Technologies chose to implement a custom-coded software solution to access, interpret and trend the radio diagnostics data. However, they decided that it would be best to have a solution based on open standards with available interface for the largest variety of host systems requiring access to the diagnostics data.

To meet the end goal of providing an open solution, DCI Technologies considered several rapid protocol modeling solutions providing standard interfaces such as OPC DA, OPC UA and DDE. In the end, the solution providing the most flexibility and functionality was the OmniServer OPC and I/O Server from Software Toolbox.

OmniServer is a fully configurable I/O server which interprets the data coming in from a device and delivers the data to any client program that supports a standard client interface, including OPC DA, OPC UA, Wonderware SuiteLink and DDE. And OmniServer does all of this without requiring a single line of custom code – protocol modeling is accomplished in an easy-to-use interface. 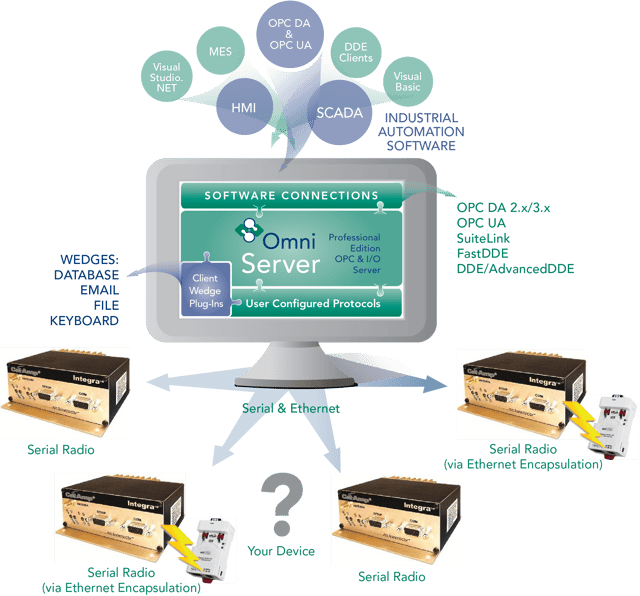 DCI Technologies was able to configure a re-usable OmniServer protocol model to receive the serial diagnostics data stream provided by these radios and parse the individual pieces of information into data items for access by any client application using one of the standard interfaces. And, going even further, the ability to use register numbers or indexes in the OmniServer protocol model to represent the data items simplified the configuration process and allowed OmniServer to essentially auto-configure the items that were available for a particular radio network based on specific IDs embedded in the diagnostics data stream.

And, since these radios have only serial connectivity, the remotely located base stations are usually reached by Ethernet-encapsulation via terminal servers such as the tDS-712 Single Port Serial Server. OmniServer supports local serial connectivity or remote terminal server sessions, providing additional flexibility with the ease of switching the connection from serial to Ethernet and vice versa. A simple setting in the topic configuration of OmniServer made it easy to switch from one method to the other in seconds.

Implementations of OmniServer for collecting these radio network diagnostics have benefitted many HMI/SCADA installations including Indusoft Web Studio, NI Lookout, Wonderware InTouch, Citect, Telvent, and others, as well as easy integration with DDE-capable applications such as Microsoft Excel. And with the continued adoption of OPC UA by many HMI/SCADA vendors, OmniServer makes it easy to provide communications to these remote systems without the issues of DCOM.

For example, having the ability to trend such operating variables as received signal strength, battery voltage and case temperatures in an HMI/SCADA can provide patterns indicating if the radio path has deteriorated, the battery had been slowly deteriorating over time or if the temperature of the radio had been trending too high or too low and contributed to a failure.

“Once a radio goes offline in one of these radio networks, it is just gone. You don’t necessarily know why without additional data,” explains Ted Skinner, President of DCI Technologies. “Having the ability to remotely collect, store and analyze the diagnostics data for a radio over time provides the folks responsible for these networks with better intelligence to pinpoint why a radio went down, how to get the radio operational again and potentially prevent the same issue in the future. The ease and flexibility with which OmniServer provides such actionable information to be easily integrated into existing SCADA host systems is extremely valuable to our users in industries where downtime can be extremely expensive.”