The country of Turkey is emerging as a growing economic and industrial power, with an estimated 6% annual increase in demand for electricity  over the next 20 years, according to the Turkish Electricity Transmission Company. Investments in the energy sector will be well  above 100 billion USD during that same period. Meriting special attention is wind power. Turkey has the highest growth rate of  installed systems worldwide, expected to leap from 1,700 MW in 2010 to  20,000 MW by 2023.

Riding this wave, a prominent electrical power production company in  Istanbul is investing heavily in renewable and alternative sources for power generation. They recently erected two new wind farms, with a third one and a thermal energy power plant on the way. Six months ago, as the construction phase neared completion, the company began looking at ways to monitor their wind farms and display the live data in their central Istanbul office, using a single web-based application.

“We needed a way to quickly view the energy production status in each of our two wind farms," said the Director of Operations. "We also wanted  to see a summary of the total count of turbines in operation, in maintenance, and in failure status, along with detailed data from each  turbine.

A challenge for the data integration was that each of the two remote  wind farms is controlled by a SCADA system that cannot be connected  directly to the Internet. NSC Teknoloji, Cogent’s distributor for the Turkish market, proposed a solution using DataHub’s WebView.

At each remote location NSC Teknoloji installed the DataHub® OPC  Tunneller and connected it to the company's SCADA system. Then they  connected both of those sites to DataHub WebView running at their central office. Once the data connection was made, NSC staff created  special web pages to display summary and detailed data of the system and the wind turbines.

“The system is performing very well, transmitting more than 30,000 data  points over the Internet, with 1-second refresh time,”said Mr. Ibrahim Serhan Arslan, Director of NSC Teknoloji. “ It is incredible that we can carry this huge amount of data over the tightly restricted bandwidth of an Internet connection”. 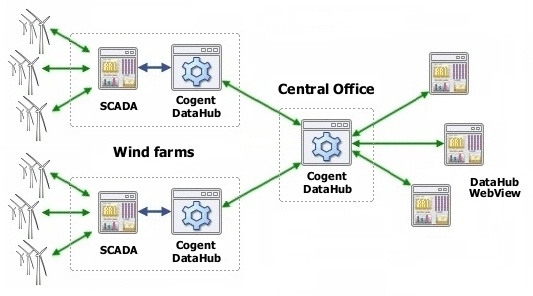 The Web HMI screens and controls were created easily through the DataHub WebView browser interface, with no programming. From his office, the Director of Operations can now view online megawatt production, wind speeds, temperatures, and total turbine count and operational status for each wind farm, all on a single page.

“In the near future we will add the third wind farm data to the system,” said Mr. Arslan. ”Before they were only able to access this data for each wind farm one by one using the SCADA vendor's web connect tool, and they had no way to view data from the whole system in one screen. Now they have a summary screen for all power plants, and the details for each plant are just one click away.”

“This is very efficient way to review the status of our wind farms,"  said the Director of Operations. "We want to thank NSC Teknoloji and Cogent for making this system work for us.”