Connecting to Wind Turbines for Control and Data Collection

The landscape is changing in cattle country. The rickety old windmills that used to pump water for the herd are giving way to a new breed of wind turbine. Wind farms are sprouting up all over the land, feeding electricity to a constantly growing market. Ranchers and farmers gain extra benefit from their rangeland, as they earn a hefty premium on every kilowatt generated.

Modern wind farms have spread dozens of wind turbines across the landscape to feed the electricity into the power grid. The control for these turbines, and the data related to the power generated is often pulled into a central location. Recently, a multi-national power company began using the OPC DataHub to centralize the data collection and control for a group of wind farms spread over several hundred miles in the Southwest United States. 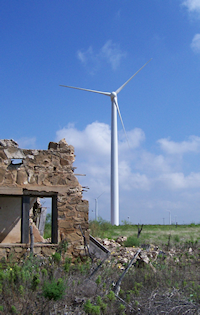 The SCADA engineer responsible for the project’s control and data acquisition systems configured an OPC DataHub at each of his wind farms to gather and concentrate the data from all of its OPC servers, and then tunnel it to his data center over a secure, firewalled network. At the data center, the data is fed into the SCADA system and a Pi database.

"We were challenged by the need to collect data from many different sources, each system with its own unique software interface," he said. "In this industry, no standard method of aggregating this data has been commercially accepted – everyone is doing their own proprietary data exchanges. Most turbine vendors have implemented an OPC server in their SCADA systems. The problem then becomes: How can you securely connect all of these systems and still get the real-time performance of a typical SCADA system?

"The advantage of the Cogent solution is that it has the ability to fork the dataflow, and allowed us to insulate the turbine SCADA system from multiple enterprise applications which were hungry for real-time information. In some cases, the OPC DataHub software was loaded directly on the OPC server with no impact on the performance of the machine. In other cases, the DataHub was loaded on another system on the same LAN which had access rights to the OPC server.

"Security is the most important and tricky factor when opening a SCADA system across a WAN. Today, it is not a question of what is possible – it’s a question of what is secure. The security features of the OPC DataHub, coupled with our existing security infrastructure, allowed the solution to meet our policies.

"Archiving the data in real time has saved time and eliminated potential errors of manual record keeping system, which was getting ridiculous once we grew beyond the single windfarm stage. We've got hundreds of turbines on different people’s property. We lease the land, and they get a percentage of the generation, so we need to know how much electricity gets generated by each turbine to pay the bills. We were doing this manually in a spreadsheet before, and it was a lot of work. Now the billing system is able to interface with a data logging feature of the OPC DataHub and the process is fully automated."

The company plans to expand the system soon by connecting in more wind farms, and by adding more functionality. They have written a DataHub script to connect a custom program to work with the incoming data stream. And with support from Cogent, they are working on a DataHub script to do data averaging across a time interval as data is logged.

"The technical support from Cogent is excellent," said a company spokesperson. "They have helped us out tremendously. We turned to the OPC DataHub because nothing else worked. Compared to all the other software evaluated, we are really pleased with it. For any interface that needs data from the windfarms, we just run it through the OPC DataHub.